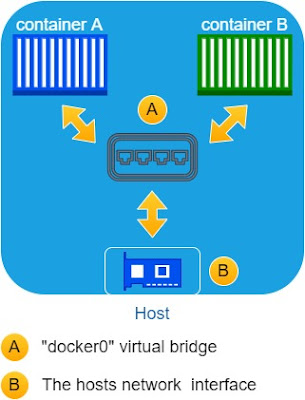 But if there is a need for a more "customized" network driver, there are third party options, like weave for example.
We can create a weave network named "weave_1" using the below command:

Then we could attach the "nginx_container" container to the "weave_1" network using the below command:

The network drivers that come with docker are as follows:
After setting up docker on a machine, it creates a docker bridge - docker0 -
We could list the virtual bridges on a system using the below command:

Remark:
Containers names as opposed to containers IP addresses don't change if a container restarts for example, so applications could use names without worrying about the containers changing IP addresses.
To see the networks that exist on a docker host, we can use the following command:

To be able to have more information about each one of the above networks, we could use the below command:

If we decide to create a user-defined network, we could define different parameters for our network like the subnet of our network, its IP range, and its gateway.
Remark:
This network is internal to our host.

We could check if it was created as follows:

Remark:
The gateway IP address is attached to the host interface.
To connect a container named "nginx_container" to the "network_1" network so it can communicate with the other containers that are on the same network, we use the following:

We could connect our container to the another network, network_2 network for example using the below command:

Then we disconnect from "network_1" network using the following: