ByIkbalCPosted atFebruary 08, 2022
Share
Among the types of virtualizations, we could find the below schemes.
Full virtualization:

Full virtualization is when the guest OS is unaware that it is running in a virtualized environment.
We could use the "regular" version of an operating system without any changes.
Paravirtualization: 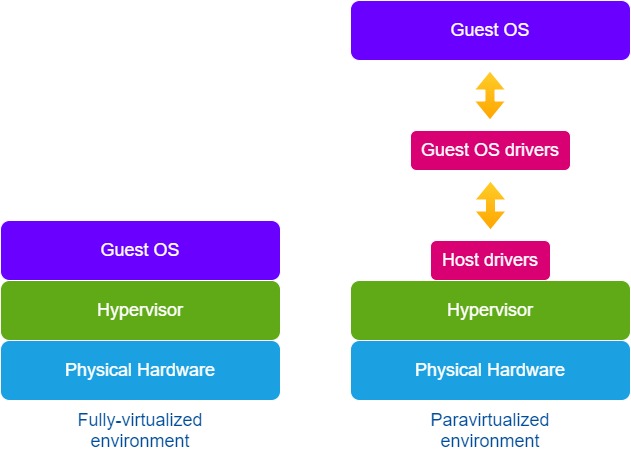 The drivers of the guest operating system use the Virtio standard/drivers.
The host - hypervisor - and the guest OS drivers know that they "live" in a virtual environment.
The host - hypervisor - drivers use QEMU, which is a piece of software that emulates various devices.
Linux uses the hypervisor functionalities by running the QEMU software in the user space in conjunction with a kernel module called the KVM.
KVM is the software that turns Linux into a hypervisor.
To work properly, the KVM needs the Intel vt-x extension of the CPU that is used to compartmentalize the hardware resources and isolate them from each other.
the Intel vt-x also offloads the translation of the virtual CPU instruction from the virtual machine making it run faster.
The Intel vt-x extension could be activated in the machine's Bios.
QEMU uses the vt-x extensions to offer an isolated environment for the guest OS, where the guest has its own RAM and CPU.
Using the vt-x extensions, the vCPUs get directly scheduled on the hardware CPUs.
Remark:
The vCPUs are considered physical CPUs by the virtual machine.
The below diagram shows us a difference between a QEMU process and a regular Linux process: