ByIkbalCPosted atMay 11, 2021
Share
For the applications that should be running all the time, we use a deployment controller, that will make sure the applications inside the pods are running, and in case they stop or they crash, the deployment takes care of restarting them.
To make sure an application runs until it is done, we use a kubernetes object called a Job controller, that will make sure the application runs until it finishes its task.
Jobs are meant for programs that perform a specific task then exit.
Non-parallel jobs:
Non-parallel Jobs run one pod, if the pod fails, another one is deployed to replace it.
Below is the Yaml configuration file of a Job running an "ls" command inside a "debian" container, then exiting: 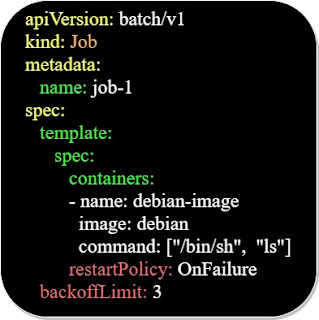 restartPolicy : it tells kubernetes whether the Job should be restarted "OnFailure". The other option is "never".
backoffLimit: is the number of times the Job will try to restart a failing pod.
Remark: There are no pod labels.
We can then create our Job using the below command:

Watching our Job:
We can watch the pod until it exits using the below command:

We can see that the pod goes from Running to the Completed state.
Getting the logs from the Job:
We can get the logs of the Job pod, since it is not deleted after it finishes.
We could do so using the below command:

Sequential jobs:
We can run Jobs one after the other (sequentially) using the below Yaml configuration file: 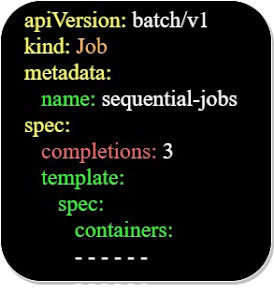 completions: three Jobs need to complete their execution.
Parallel jobs:
We could also run Jobs in parallel at the same time using the below Yaml configuration file: 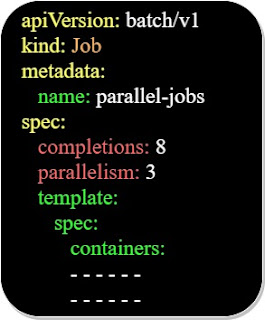 completions: eight Jobs need to complete their execution.
parallelism: maximum of Jobs that can run at the same time (in parallel).
Displaying the jobs:
We could display the Jobs in our cluster using the below command:

In case we want to run our Jobs periodically, we would need to use another kubernetes object called a CronJob.
Post a Comment
Labels#Kubernetes