To be able to automate the building of a docker image, we use a Dockerfile. The dockerfile contains all the necessary instruction to build an image.

Below, is a dockerfile simple example: 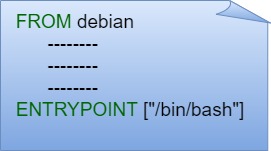 To run the container, we get the ID of the image using the below command:

Then we run the image using the Debian IMAGE ID above :

As opposed to "ENTRYPOINT", we can override the "CMD" command with another command.
We can mention the command we want to run at the start of the container using the "docker run" command as below:

If we don't mention any command, the "CMD" command will run at the start of the container.
Post a Comment
Labels#docker