Docker allows us to run single applications inside a container, but when we have thousand of containers running on different nodes, we would need a way to watch the load of the nodes, their health, the state of the containers and whether we need to re-deploy a failing container ...

That is the role of kubernetes.

Pod is the smallest unit in kubernetes. It is a layer that wraps around the container making it possible for it to run in kubernetes. Pods typically runs only one container but they can run more than one. They also have an IP address.

Below a diagram showing an overview of kubernetes: 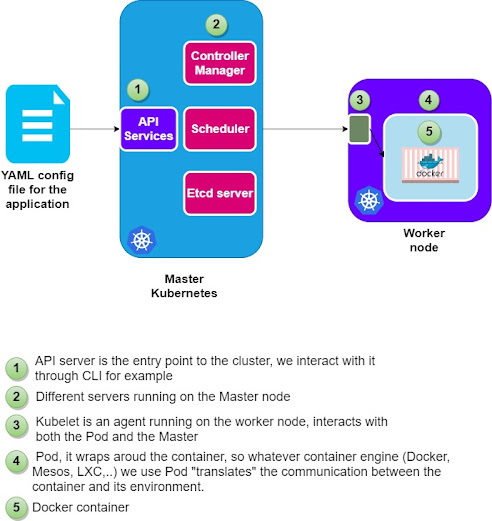 We feed the API server the YAML configuration file though the command line or GUI.The file contains instructions about the creation of the pods on the worker nodes.

API Server : It is considered the entry point to the kubernetes cluster, it is the interface that lets us talk to the cluster through the command line or GUI. It also manages authentication, deployment of new nodes,...

Controller manager : When Pods stop working, we need to reschedule them as soon as possible. The controller manager among other things detects the crashing Pods and orders the Scheduler (see below) to re-deploy the Pod.

Scheduler : Starts a Pod on a worker node after deciding which node has enough resources and is more suitable for the application we want to deploy. It then instructs the Kubelet (on the worker node) to start the Pod (see below). 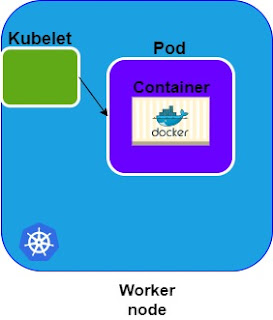 Pod (explained above): It is a layer that wraps around the containers. We can use different container engines to start the containers that run inside the pods ( Docker, Mesos or LXC ).

Kubelet proxy: makes sure the containers on the nodes reach each other using different tools like port forwarding and masquerading with the help of the iptables.