Linux 101 : A short overview of iptables 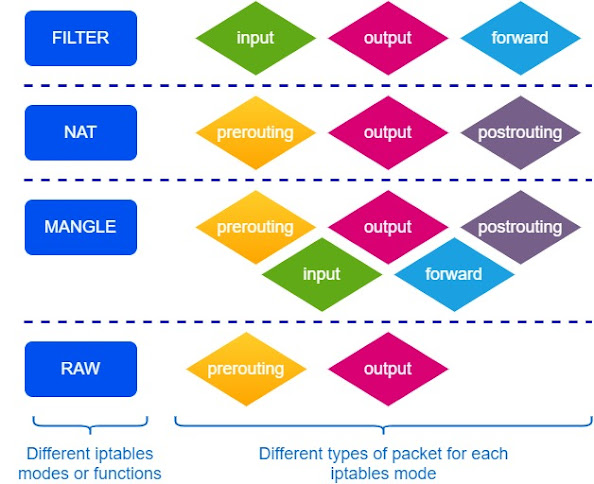 The iptables firewall labels packets according to the way they behave. These packet types are called chains.
Below are the types - chains - of packets:
Below is a short list of tables - firewall functions/modes - and their associated packet types - chains - :
For each packet type or chain, iptables has a set of actions or rules called targets.
Packets can be categorized by many parameters - their source IP address,  their destination IP address, their protocol, their ports, ... -
Remark:
If no rule/policy is defined for a packet, a default policy is applied to it.
The action or target is what iptables does with a packet once it matches certain criteria - IP address, protocol, ports, ... -.
Below is the list of iptables targets :
To be able to display the iptables policies on a machine, we use the below command:

Below are some example of the iptables commands.
The drop - target or rule - is applied to the filter table on the INPUT packet - chain - in the below command:

The below command sets the default rule for the INPUT packets. It is used when a packet matches no other rule.

Remark:
The filter table is the default table when no other table is mentioned.
The below command appends a rule to the INPUT packets in the filter table - incoming packets with a destination IP "10.11.61.12" are rejected -

If the INPUT packet matches the rule - source of the input packet is 10.11.61.12 - iptables execute the target/action -ACCEPT -.

If the OUTPUT packet matches the rule - protocol is UDP and the source port is 80 - iptables execute the target/action - ACCEPT -:

Remark:
Before doing any manipulations, we could save our iptables settings into a file as below:

If we want to drop the new changes and go back to our earlier settings, we could flush the tables as below:

Then restore the tables from our backup using the following command: