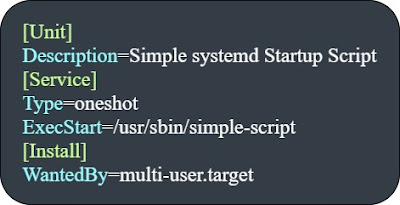 The above script represents a startup file a systemd service "simple-script".
The parameter "Type=oneshot" means that the program executes until it finishes and exits.
Systemd waits for the program to exit. It suits the processes that do a "job" and exit.
The "wantedby" simply means that this service needs to be started when we move to the multi-user.target "target" or "run-level".
To make the script run at boot time, we will need to enable it using the below command:

Sometimes the oneshot program is needed as a dependency for other services.
In that case we can combine the "Type=oneshot" feature with the "RemainAfterExit=yes" feature that tells systemd to keep the oneshot program as "active" even after it finishes its task.
We could see an example of that by running the below command:

Below is a "Oneshot" and "RemainAfterExit" example: 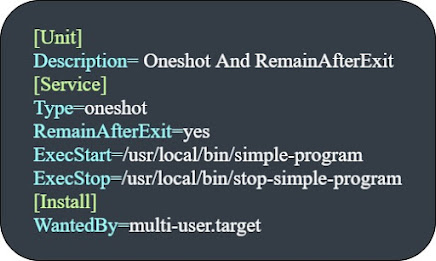 Below is an explanation of some of the parameters used:
Remark:
Re-running the above init script will not start anything.

Sending notification about the successful "start" of a program, might be useful in same cases.
We could do that using the parameter "notify" as you can see below: 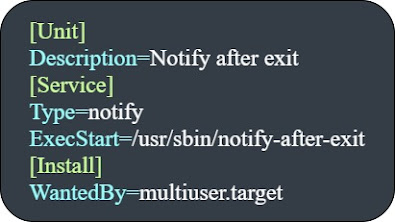 For this kind of services, systemd will "kill" the service if it doesn't receive any "success notification" after a certain period - timeout -.

Below is a short description of the most used parameter in the init script files:
Post a Comment
Labels#Linux