Kubernetes 101 : Shared "Process ID" namespace between containers in a pod

ByIkbalCPosted atMarch 31, 2022
Share
Usually containers within the same pod share the IPC and the Network namespace.
Containers in the same pod communicate via IPC - Inter-process Communication -, the loopback interface or even through a shared volume that is accessible to the containers living inside a pod.
Namespaces is a Linux concept that allow us to isolate resources - IPC, cgroup, Mount, PID, ... -.
PID namespaces allow us to have two processes with the same process IDs if they live in different PID namespaces.
We could have for example a process on the host with PID=1 - systemd - and in another PID namespace, we could also have a different process with the same PID=1.
The "shareProcessNamespace" option allows containers within the some pod to have access to the same PID namespace.
The "shareProcessNamespace" could be set in the Yaml file of the pod as we can see below: 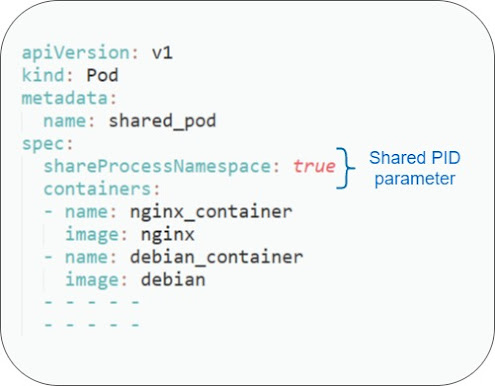 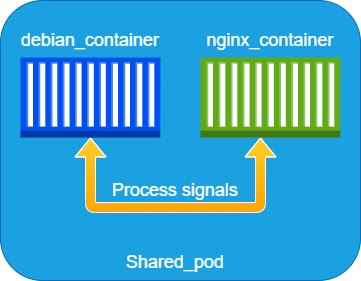 Below are example of the most commonly used signals:
We could get the full list of signals by using the below command:

Since our pod and its containers are already running, we can attach to the shell of one of the running containers - nginx_container - for example to be able to run command inside it, using the below command:

Once inside the "nginx_container" container, we could list the processes and their PIDs using the below command: