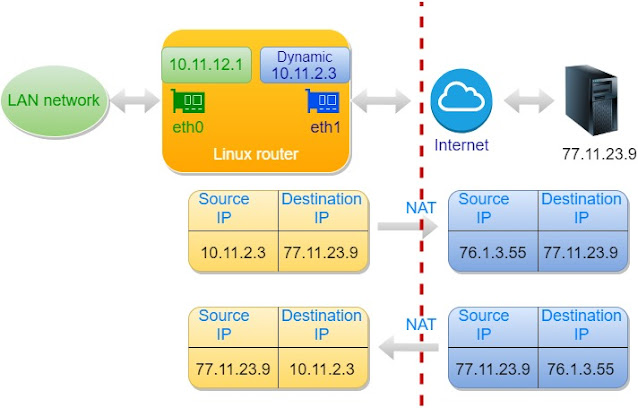 We configure the "eth1" interface on the Linux router machine to receive an IP address via a DHCP server;
The configuration is done in the "/etc/network/interfaces" as we can see below:

Firewal rules for the eth1 interface:
We start by configuring the NAT on the "eth1" interface as below:

We also enable the routing abilities from the "eth1" interface to the "eth0" interface of the Linux router, using the below command:

Then we enable the routing abilities from the "eth0" interface to the "eth1" interface of the Linux router, using the below command:

* -t : refers to the "table" , here we deal we the "nat" table.
* -A : refers to the rules or "chain" of the iptables (POSTROUTING, FORWARD, ...)
* i : input interface.
* o : output interface
* -m : means "matches".
* -j : action if the preceding "rules" are true.
* RELATED : means that the received IP packet is starting a new
connection, that is related to an already existing connection.
* ESTABLISHED : means that the received IP packet is associated with an already established connection.
Post a Comment
Labels#Linux