ByIkbalCPosted atApril 23, 2021
Share
The BIOS stands for Basic input output system and UEFI stands for Unified Extensible Firmware Interface
Usually we use either BIOS or UEFI.
They both act as an interface between the hardware and the operating system.
The BIOS: 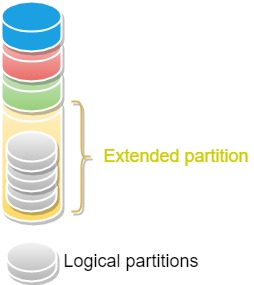 With the BIOS, we would have the first sector of the drive as the boot sector, that is where the MBR "Master Boot Record" lives.
It tells the machine where the partitions are and where the boot partition is.
We can only have four partitions using the BIOS/MBR combination, the only way to have more partitions is to have a an extended partition with logical partitions inside.
Also, there is limitation on how much disk space the boot sector
could point to.

The UFEI:
With the UEFI we would have an entire partition for the boot code of the operating system.
Using UEFI, we could have way more partitions on much bigger hard drives than what the BIOS allows.
UEFI also supports secure boot that guarantees that devices will only boot using trusted boot code.
Bootloaders:

Grub2 is what the UEFI uses to transition into the operating system.
The "grub.cfg" is the configuration file of the grub bootloader.

To get to the Grub2 interactive menu, we sometimes need to press <SHIFT> or <ESC> while the computer is booting.
Once we make changes to the grub parameters in the configuration file "grub.cfg", we use the below command to update grub with the new parameters.