Kubernetes 101 : Disruptive and non-disruptive updates of a deployment

ByIkbalCPosted atApril 28, 2021
Share
Below, we have a Yaml configuration file for a deployment with two "nginx" replicas: 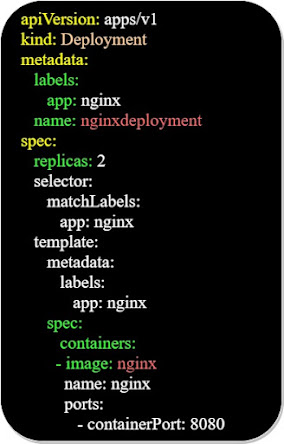 The non-disruptive way of updating a deployment:
The below command opens the Yaml file "deployment-1.yaml" in the Vi editor:

After updating the Yaml file "deployment-1" in Vi, we save it and we apply the changes using the below command:

Remark:
Vi is the default editor. It could be changed using the environment variable "KUBE_EDITOR".
The "Vi" editor basic commands:
Below are some useful "Vi" editor commands:
Disruptive updates "deployment":
To force the update of our deployment that for some reason couldn't be done non-disruptively, we use the below command to delete and re-create our resource.
After modifying our Yaml file, we can "force" the update using the below command: