ByIkbalCPosted atMarch 05, 2021
Share
Ingress and Egress traffic:
Ingress traffic: is the traffic coming into the server
Egress traffic : is the outgoing traffic leaving to initiate a connection.
Network policies:

For example we allow Ingress traffic from the database_pod to a web_pod on port 3310 using the below network policy in a Yaml file format.
Network policy configuration file:
Below the "network-policy.yaml" file: 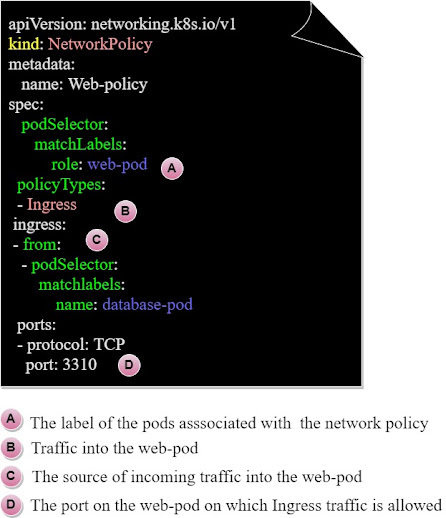 We then create the policy using the below command:

Remark:
When we allow traffic into the web-pod the response going out of the web-pod is allowed too, we don't need an Egress rule for that.
On the other hand, in the above network policy, the database-pod can't initiate a connection to the web-pod, it needs an Egress rule to be a able to do that.
Post a Comment
Labels#Kubernetes