ByIkbalCPosted atFebruary 15, 2021
Share
The default docker bridge interface "docker0":
Docker by default creates a network for the containers on a host, it is called the docker0 bridge network as you can see below:

Creating a user-defined network:
If we don't the driver type, docker uses the default "bridge" network:

--driver : is the driver implemented by the network.
The options include "bridge" and "overlay". There are also other third-party drivers as well like "weave" for example.
Inspecting a network:
The below command allows us to see the containers connected to the network, the IP address, ...

If we don't specify a driver , docker uses the default bridge driver.
Deleting a network:
Before deleting a network, we need to make sure that we have disconnected all the containers connected to it, using the below command:

Then, we can remove the network:

We could use the network_name or the network ID that we can get using the below:

Connecting containers to a network:
If we don't mention any network the container gets attached to the default docker0 bridge as below:

Remark:
When referring to the "debian1" container, we could use the first two characters if they are unique among the other containers.
We then check the interfaces inside the debian1 container:

We run the below commands to disconnect the container debian1 from the default bridge network and we connect it to the new net_1 network:

Then, we recheck the address of the container:

We see that the address has changed, and that the container is now connected to the new network net_1 "172.21.0.2/16".
We could also use the below command to see which containers are attached to the "net_1" network: 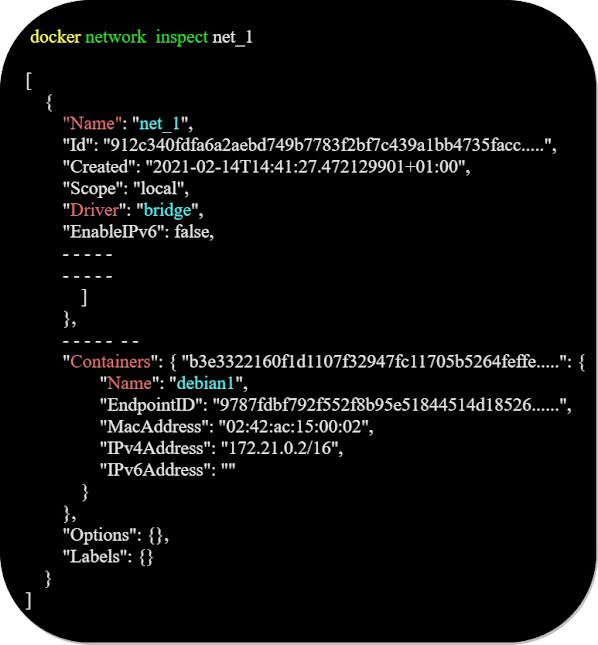