The "rules" are the "characteristics" of a packet asking questions like, does a packet have a certain source IP address, is it destined to a certain port,...?
Stopping traffic from a certain IP address:

"-A" : means append the rule to the already existing iptables rules.
"INPUT": we are using the IMPUT chain because we are dealing with incoming traffic.
"-s ip_address" : Packets that match that rule(their source IP matches the IP in orange) gets dropped as mentioned in the target.
"-J DROP": target determines the  fate of the packet when the rule is met. In our case we drop it.
Stopping traffic from a network: 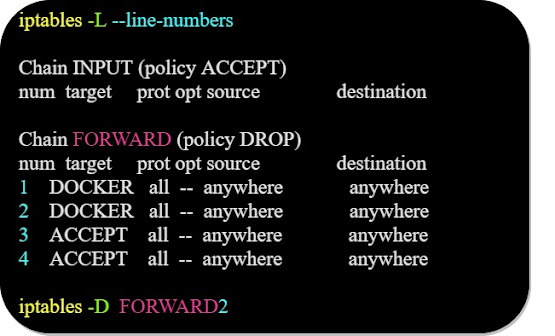 deletes the rule on line : 2 in the FORWARD chain
Blocking a specific protocol:

Blocks traffic on the "sshd" port :22 without informing the source.
Blocking traffic on a certain interface:

Blocks traffic coming on the "eth0" interface from the source IP address "10.1.12.32" without informing the source.
Blocking outbound traffic to a certain site:

We start by looking up the IP address of the site:

Then we use the below command to block/drop all outbound traffic to that site:

-P :policy
Remark:
The order of the commands matters ("1" then "2").
If we reverse the order of the two commands, all "INPUT" traffic will be dropped.
Persistent rules:

For the iptables rules to persist after a reboot, we need to run the below command:

It saves the configuration in the "/etc/sysconfig/iptables" file.
Listing the rules of iptables:
We use the below command to list the rules of the "iptables":

Which means all the INPUT traffic will be dropped: