The bootloader is a small program (starts after the hardware check) that lets you choose when and how to launch the operating system.
Root filesystem:
The root filesystem is a relatively small filesystem, it contains all the important system files spread out in different directories under the root directory (top directory in the hierarchy of folders).
The Kernel: 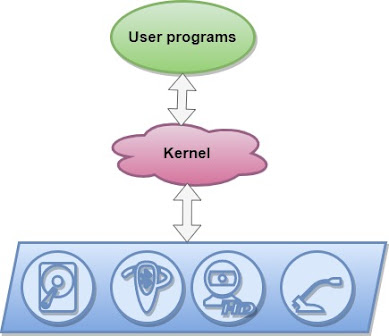 The kernel sits between user-programs and the hardware. When a program wants to access memory for example, the kernel takes care of that task.
The standard kernel is normally located at /boot/kernel and is started by the bootloader.
The kernel does the hardware check and mounts the root filesystem (/), it passes control to the script init.

Init is the first program that runs and has the process ID 1.
FreeBSD modes:
In FreeBSD we have two modes:
Startup options are controlled by the configuration file rc.conf.