ByIkbalCPosted atMarch 16, 2021
Share
A docker image is made up of read-only layers.
Each one of these layers correspond to an instruction in the Dockerfile.
We use a Dockerfile to build a read-only image that we will later run in containers.
Below is an example of a Dockerfile:

And we run the below command to get our docker image:

After we run the above command, docker adds a new writable layer on top of the read-only layers. 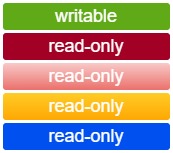 Anytime docker creates a new element (file, interface, ...), or makes a change to an element in the read-only layers , the change is written to the writable layer using the COW (Copy On Write) model.
When the container exits, the writable layer and all its data are lost.
Persistent volumes (volume mount):

If we want to keep our data after the container exits, we need to create a persistent volume.
The below command creates the "/var/lib/docker/volumes/data_1" folder on the host and mounts it inside the container on the mountpoint "/var/lib/database" and runs the "mongo" image.

The volume driver plugins manage volumes and allows docker containers to be deployed with an external storage on a variety of platforms (Convoy, Azure File Storage, ...)
We can specify a volume driver when running a container: